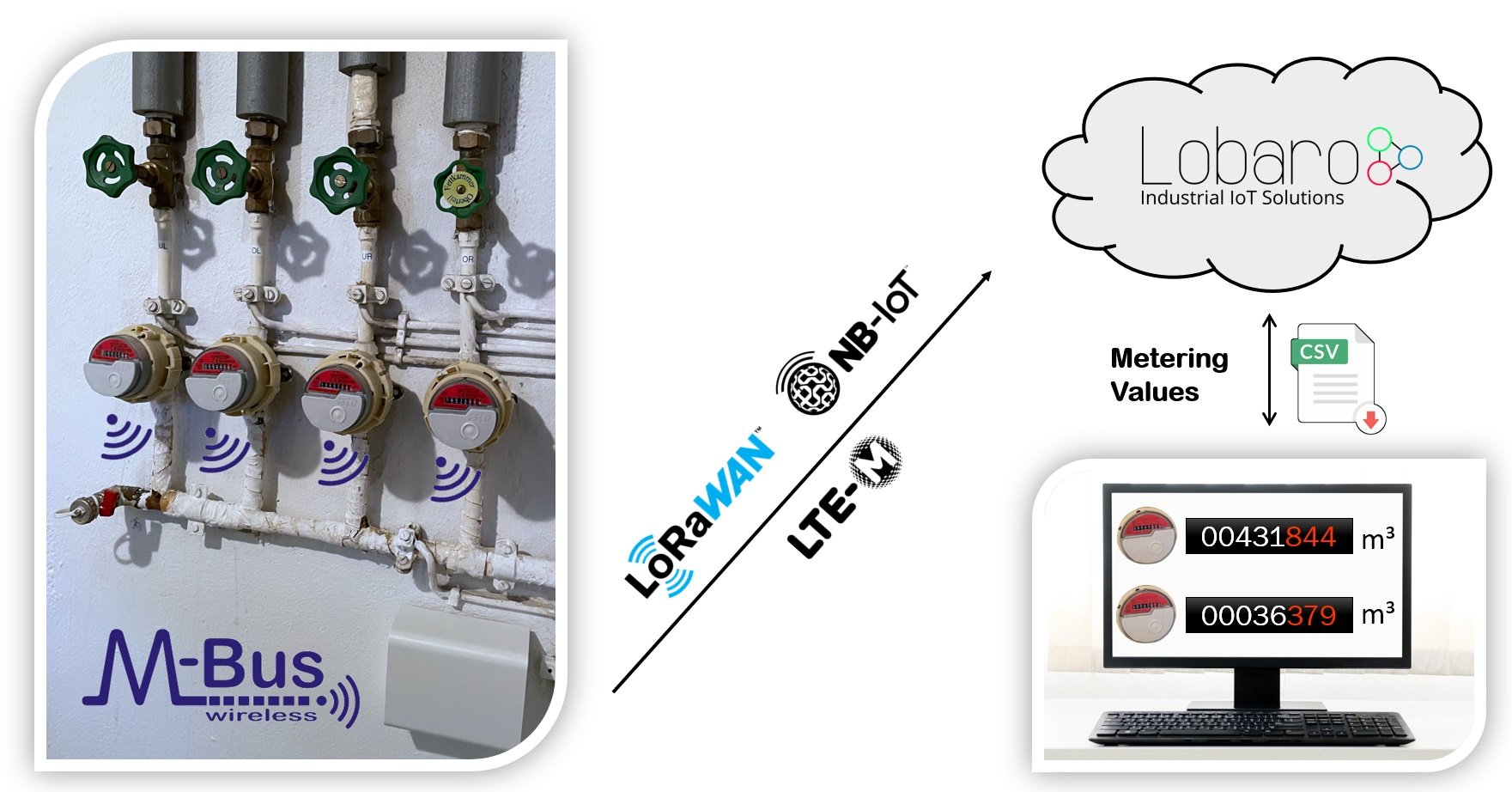 Forwarded meter values are transmitted, optionally additionally encrypted via DTLS, to a shared or private instance of the Lobaro IoT platform and can be viewed there or downloaded as a CSV file. Alternatively, standardised APIs such as MQTT, HTTP Push, SFTP or a REST interface are available to connect downstream systems or platforms easily and securely. When using LoRaWAN, the Lobaro Platform is optional. When using NB-IoT or LTE-M, on the other hand, it is mandatory. This requirement is explained in the Lobaro IoT Platform FAQ.

Thanks to the new NB-IoT mobile radio, optimised for sensor data, remote reading even works in places such as basements where smartphones have poor or no reception.

This firmware, following the naming sheme app-nrf9160-wmbus-TZ2-VERSION-HARDWARE, exists in versions targeted for different Lobaro hardware. On all hardware the workflows and functionality is the same. If a certain firmware feature is not available on a specific hardware variant, this will be indicated separately. 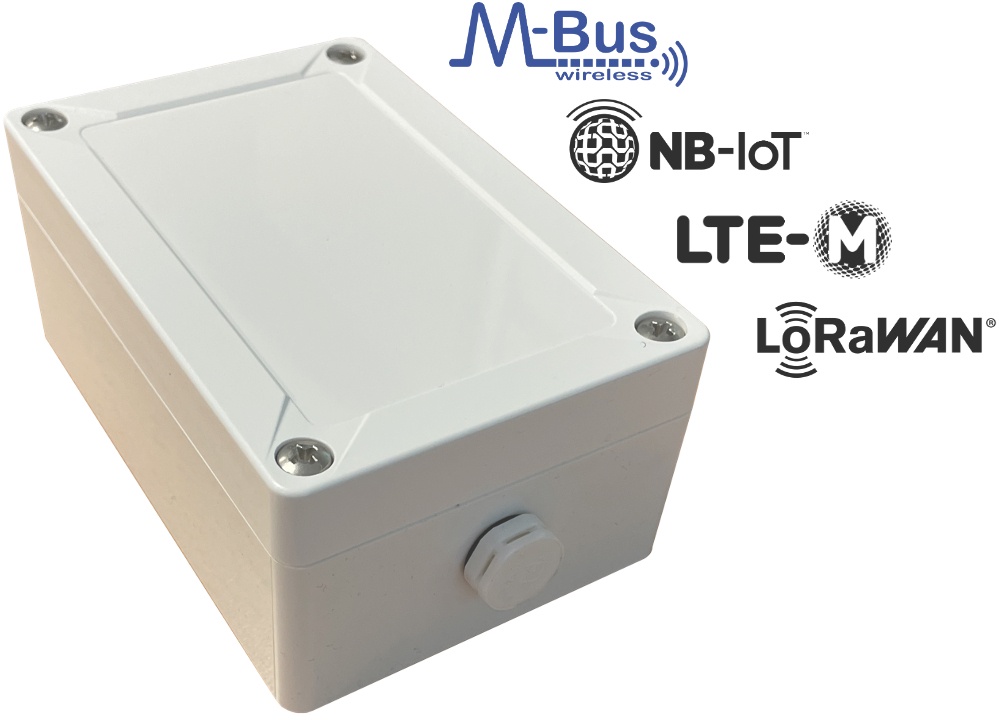 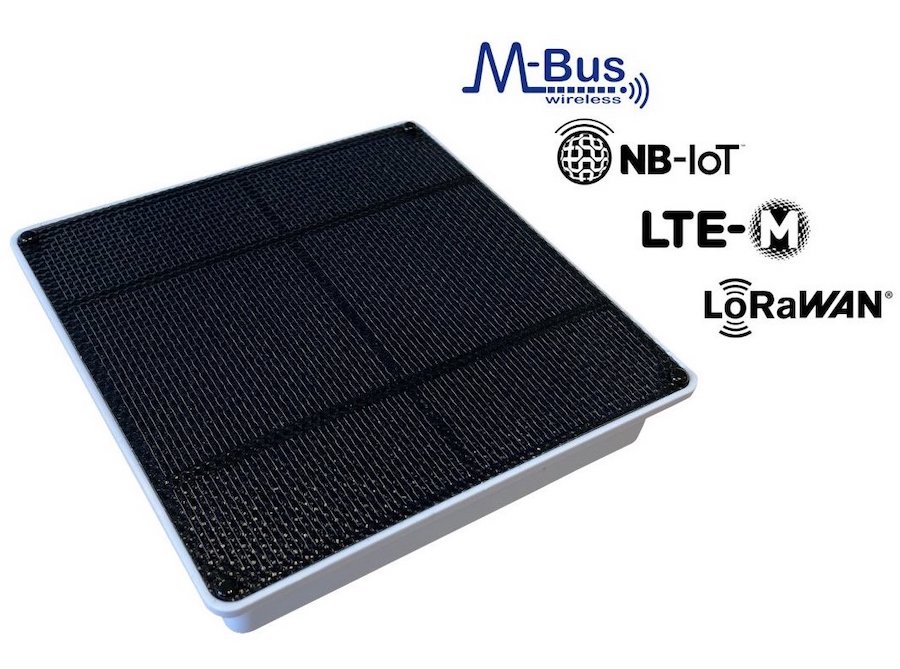 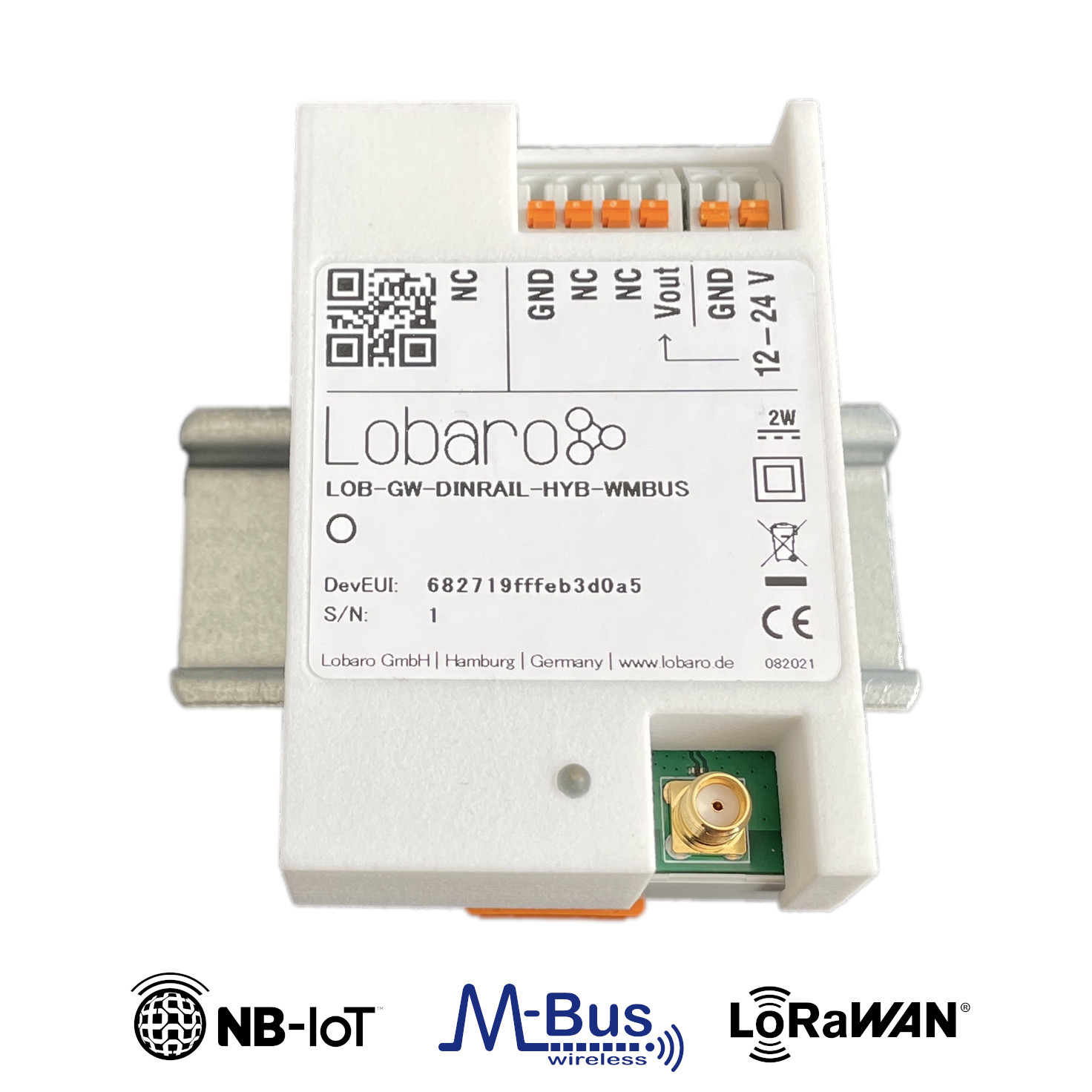 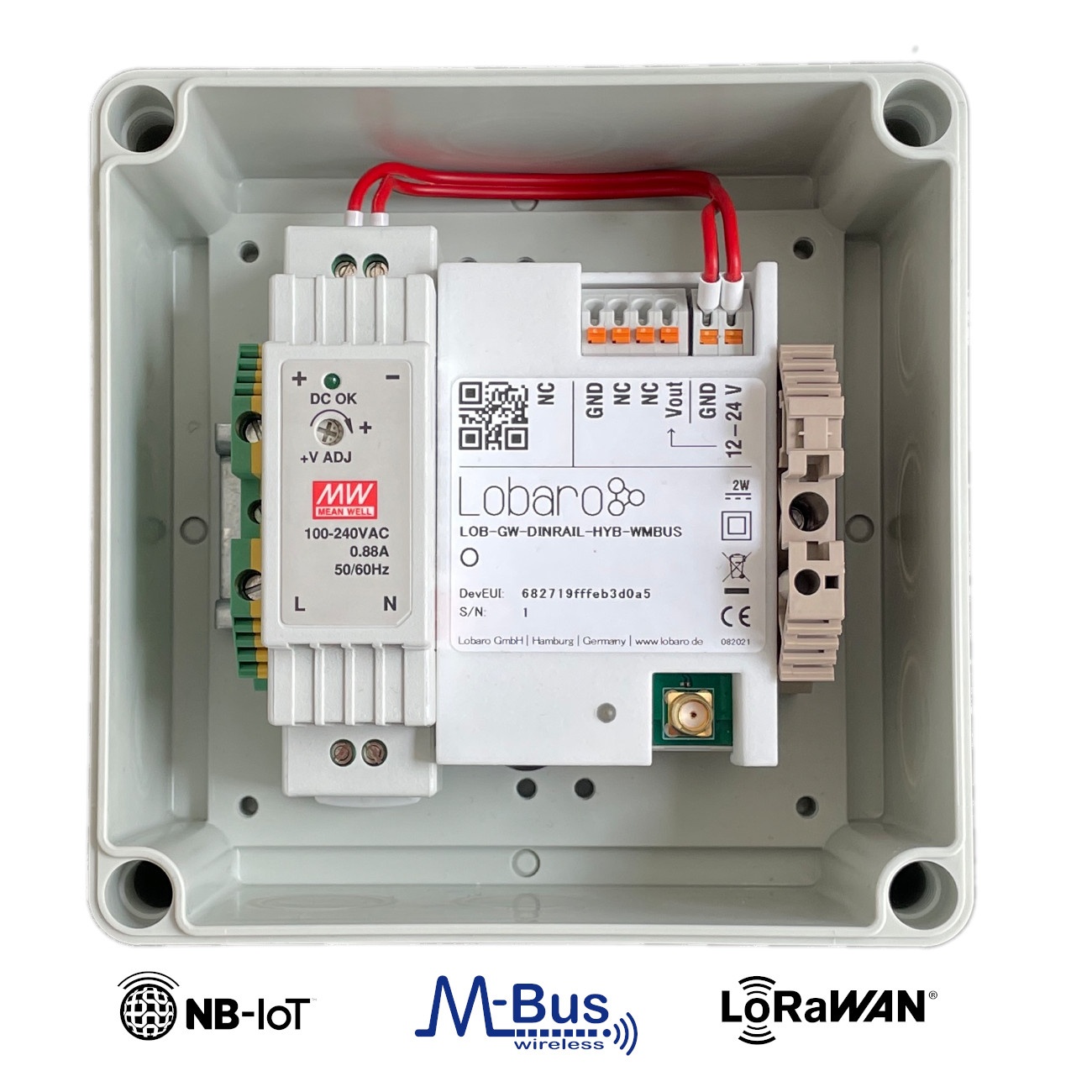 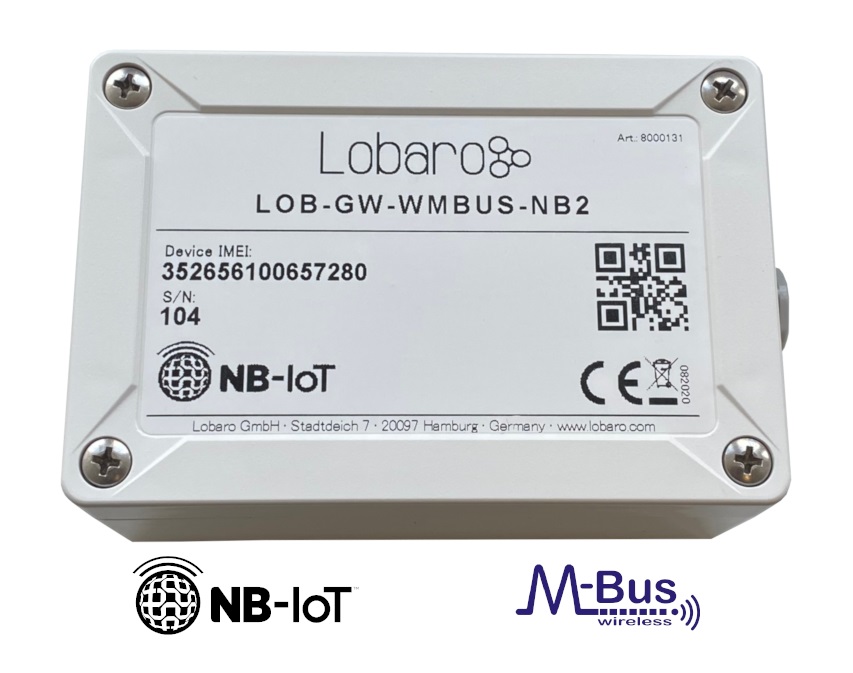 The gateway remains in power-saving mode while not active most of the time. It leaves the low power sleep mode in the following situations:

Configurations of up to 5.000 bytes are supported, which enables a Device-Whitelist of up to 500 Meter-IDs.

This parameter can be used to set whether cellular IoT (NB-IoT, LTE-M) or LoraWAN is to be used for data transmission. With LoRaWAN, the type of network join can also be defined (ABP vs. OTAA).

The connection to the LoRaWAN network is defined by multiple configuration parameters. This need to be set according to your LoRaWAN network and the way your device is supposed to be attached to it, or the device will not be able to send any data.

For a detailed introduction into how this values need to be configured, please refer to the chapter LoRaWAN configuration in our LoRaWAN background article.

The NB-IoT functionality is enabled if the WAN parameter is set to "lte". A SIM-Card has to inserted.

Wireless M-BUS data can be viewed and further processed, e.g. using MQTT, HTTP-Push or the REST interface, in the Lobaro IoT platform. It can be connected with various available LoRaWAN network servers or used directly using cellular IoT, e.g. NB-IoT or LTE-M.

When using NB-IoT or LTE-M for data upload it is currently mandatory. This requirement is explained in the Lobaro IoT Platform FAQ. 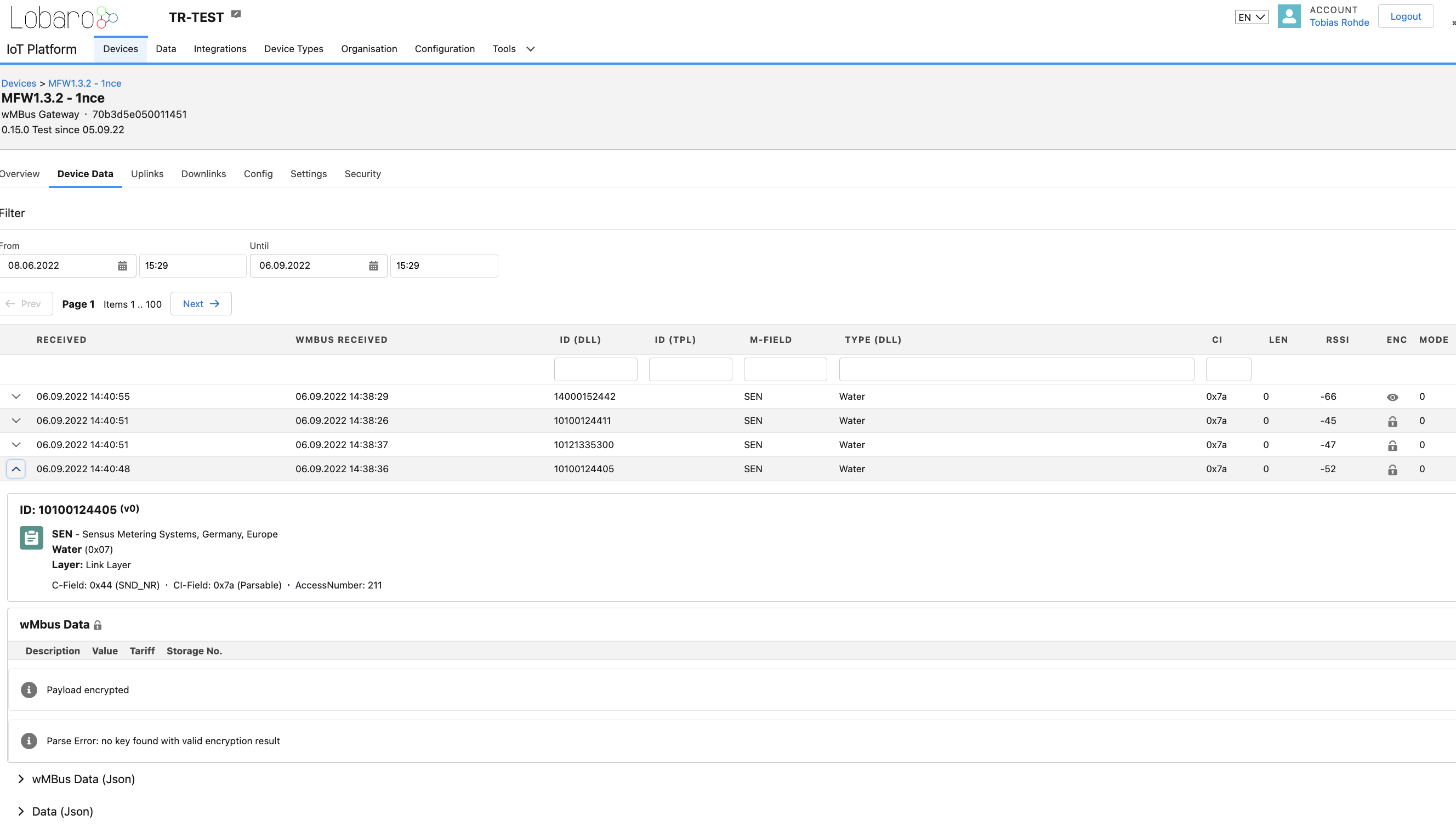 The SaaS instance is available at platform.lobaro.com. It's free for testing purposes.

After collecting wireless M-Bus telegrams over the air, the Bridge starts uploading data via LoRaWAN. There exist two data formats that are transmitted over different LoRaWAN ports. As LoRaWAN can only transmit very short messages, the message formats contain only data bytes. The meaning of a byte is determined by its position within a message. The following describes the package formats used by the wireless M-Bus Bridge.

M-Bus telegrams can be longer as the maximal size of a LoRaWAN-Message. For this cases, the Bridge needs to split a telegram into multiple pieces and upload it using multiple LoRaWAN-Messages. There are two different methods this is done, according by the Payload Format you set in the Bridge's configuration.

Payload Format 0 is focused on easy reassembly of the pieces. The parts are encoded by port numbers and the data can just be concatenated together. Payload Formats 1 and 2 add additional information to the telegram. They focus on putting as much of a telegram in a single LoRaWAN-Message as possible with respecting the current Spreading Factor.

Port 1 - In order to provide some information about the health & connectivity state of the device itself, the device sends a status update at a daily basis. The status packet is sent on the first upload phase after activation of the device (after reboot) and then repeatedly in every upload phase that takes place a day or longer after the previous status packet. It has a length of 7 or 8 bytes. The battery voltages and ambient temperature are encodes as 16 bit integer using little endian encoding.

The temperature sensor is not present anymore on dedicated V2 hardware, instead 0xffff will be returned.

We provide a JavaScript reference implementation of a decoder for this status packet on GitHub, which can be used directly for decoding in The Things Network.

After each wMBUS collecting phase, all saved telegrams (up to 500 can be stored) will be uploaded via LoRaWAN uplink messages as fast as possible. The received wMBUS telegrams that did pass the configured white list filters will be uploaded without any modification in one or more LoRaWAN messages. If a wMBUS telegram is bigger than the bridge configuration parameter loraMaxMsgSize the transmission will be done using multiple LoRaWAN messages. This parameter is limited to ≤ 50 bytes due to LoRaWANs maximum payload size restrictions. In case of telegram splitting is needed the receiving backend application server as to reassemble the original wMBUS telegram before decryption & parsing of the meter data. This is done by simply joining the messages together in the order of receive. The LoRaWAN port encodes identifies a LoRaWAN fragment of the original wireless M-Bus telegram. This way partial messages can be identified using the LoRaWAN Port:

Gaps in the LoRaWAN Frame Counter are giving a hint for missing telegram parts which can happen in LoRaWAN since it's a ALOHA based protocol, e.g. collisions and some packet losses are accepted by principle of operation. In case the backend noticed a missing packet the wMBUS telegram can't be assembled anymore as described before.

When using Payload Format 1, collected telegrams are uploaded on a single Port: 101. For each telegram there will be added the timestamp of reception. The first byte of messages on Port 101 encodes splitting of messages as follows.

The combination of those two Bits and the Frame Counter of the Uplinks makes it possible to upload Messages of any length while allowing the receiving side to now exactly, if a Message has been transferred completely, or if part of it is missing (when there are Frame Counter values missing).

When the data of all Uplinks that are part of a single Message are appended in order of reception (after removing the first Byte of each Uplink), you get the payload Data of a full message.

The Payload Data after reassembly of the split parts consists of a 5 Byte Timestamp, that marks the point in time the Bridge did receive that telegram, followed by the Data of the Telegram. The Timestamp follows the convention of all our 40bit-Timestamps; you can find the details under Timestamp in our LoRaWAN Background Information.

A message sent in a single Uplink

A message split over two Uplinks

A message split over three Uplinks

Uplinks with a missing a Part

The bridge has to work in compliance with the European SRD 868 1% duty-cycle regulations. This implies as a rule of thumb the device can upload at most wMBUS telegrams via LoRaWAN for 36 seconds every hour.

The actual transmit time ('ToA: time on air') for each LoRaWAN message depends on the byte size and the used LoRa spreading factor (SF) which defines how redundant LoRa data is send. This means a device with good connectivity and consequently using LoRa SF7 (ToA ≤ 0,050s) can upload much faster more data than a node using LoRa SF11 (ToA ≥ 1s) due to a hard to reach LoRaWAN gateway. The bridge will upload in conformity with the regulations automatically as fast as possible. When it has to wait it enters a low power sleep mode until the next transmission is possible again. The next data collection phase will be started only after completion of the previous upload phase in respect to the configured listenCron parameter. Because of this it is advisable to define the cron parameter with an estimation of the upload duration in mind. This will avoid unexpected 'skipping' of data collection phases.

Update of Configuration parameters is documented in our LoRaWAN downlink messages documentation.

A downlink that triggers an Ad hoc readout, independent of CRON triggers. The Ad-hoc readout is using the same parameters (filters and listening duration) as a CRON triggered readout.

After receiving the raw wireless M-Bus telegrams from your LoRaWAN network provider the actual metering data has to be decrypted and decoded by a backend service for further processing. The details of this are described in the EN 13757 norm and the newer OMS specification, which is a clarification of the original underlying norm.

A universal wireless M-Bus decoder is a relatively complicated piece of software if you start implementing it from scratch since the norm covers many different use cases, units, meter types and data formats. If you know in advance the exact telegram format of the deployed meters in your setup a hard coded data decoding may be a feasible approach. This is because wireless M-Bus devices often send the same telegram format in every transmission. Please contact the manufacturer of your meters for the needed telegram format details.

An an alternative to support a quick evaluation of our hardware Lobaro offers a easy to use webservice which is designed to decode all sorts of wMBUS input data including decryption if the correct key has been provided. You can access the decoder service for free during testing. The API can be licensed for production usages.

Your meter fails to parse correctly?

Since wireless MBUS is a complex and grown specification some meters may fail to decode correctly. We try to fix any decoding issues as quickly as possible if you report us problems with your specific wMBUS device.