Important note:
Downlinks should only be used to a limited extent depending on the infrastructure. In the free version of TTN, the Fair use policy says, that no more than 10 downlinks should be made. You also have to observe the regulations within the Limit of the duty cycle limitation. That is why Downlinks are only to be carried out with caution and when absolutely necessary.  The number of possible characters that can be sent is limited by the respective spreading factor (With a SF of 12 only 51 characters).

The applicable and possible downlinks depend on the device and the firmware version.

The described examples do not claim to be complete and are used at your own risk.

IoT devices are often installed at places that are difficult to reach. If you need to change the settings of such a device it is often not easily possible to get physical access to attach a config adapter.

Many of our devices support Remote Configuration that allows you to change the configuration of the device by sending Downlink messages via LoRaWAN.

The Remote Configuration must be enabled in the device by setting the parameter RemoteConf to true. If this is set to false, none of the remote commands described here will work, and you can only activate it with physical access to the device. This is meant as a security feature if you want to make sure that your device will not be controlled over the network.

If you are using Remote Configuration, please be aware that LoRaWAN devices can only be reached by the network under certain conditions. See Uplinks and Downlinks.

The first byte of a Downlink message on port 128 contains a single character that identifies the command you want to send. Some commands take a parameter following the command char.

The responses to a command start with the same character as the command followed by an optional parameter. If a command is unknown or it fails for some reason, an error response is sent via Uplink that contains with a ! followed by a readable error message.

For long reponses the first part is sent on Port 129, the middle parts (if exist) on Port 130 and the last part on Port 131. A stateful parser can concatinate long responses based on Port and FCnt.

Depending on the firmware version not all commands might be supported on all devices.

Please reffer to the manual of your product for more details.

Get the value of the config parameter <name>. This command makes the device sent a response containing <name>=<value> as parameter giving you the current value of a configuration parameter.

Reset config parameter <name> to its default value. As a confirmation the device sends a response containing <name>=<value>, reporting the new value of the parameter.Sending the special value * will reset all config parameters.

Append <value> to the config parameter <name>. This command appends the value given to the current value of the parameter. This is intended to allow setting values that are too long for a single Downlink message. As a confirmation it sends the length of the config parameter's value after the appending. Append works for config parameters of type string.

Reboot device without saving. This command restarts the device. Any changes too the config that have been committed before will be lost! This command does not send a Response.

Using wFORCE can leave your device useless and unreachable!

Do not use wFORCE unless you have a very good reason. If the device is set to an invalid configuration it will no longer be reachable by the Network Server. From such a state it can only be recovered with physical access and a config adapter. It will also most likely drain the battery quickly.

The following is a short example of how you can update two configuration values remotely (that includes rebooting the device).

Most LoRaWAN devices (all that are running in Class A, which are by fast the most) can only be reached when they contact the network. Network Servers (like The Things Network) provide a mechanism to enqueue messages for a specific device. The messages will be sent as downlink the next time that device contacts the network. Normally, multiple messages can be enqueued and will all be transmitted as soon as possible. Please be advised that the gateways communicating with your device must respect their duty cycle, so there is a very limited amount of downlinks that can be sent for a given time (downlinks are expensive).

For this example we want to set Time Synchronization to sync the internal clock every 10 days, and we want to deactivate Adaptive Date Rate (ADR). These are both LoRaWAN configuration parameters that are present on most devices (find details under LoRaWAN Configuration), but you can of course also change parameters specific to your device, e.g. Modbus configuration or wMBus configuration, with this feature.

We will need to send three commands:

The s-commands will of course differ for your case, but the w command at the end will be the same.

How you sent your downlinks depends on the LoRaWAN Network Server you use to connect your devices. You will most likely need to convert the commands (that are all ASCII) to some different representation, e.g. Hex or Base64.

In The Things Network you find the downlink panel on the "Device Overview" page for each device, directly below the panel that shows you OTAA/ABP information (DevEUI, AppKey, ...). It is shown in the following screenshot:

You will have to encode the commands in hex. In the screenshot you see 73 54 69 6d 65 53 79 6e 63 3d 31 30 as the message to send; that is the hex representation of sTimeSync=10. The Port used for remote configuration for our devices is 128. When you enter multiple messages to send, be sure to set the correct scheduling (last). The preselected replace will overwrite your previously enqueued messages.

Example 1: Getting the firmware version:

Example to do this over TTN Console:

On your TTN Console choose your Application and your Device, Messaging: 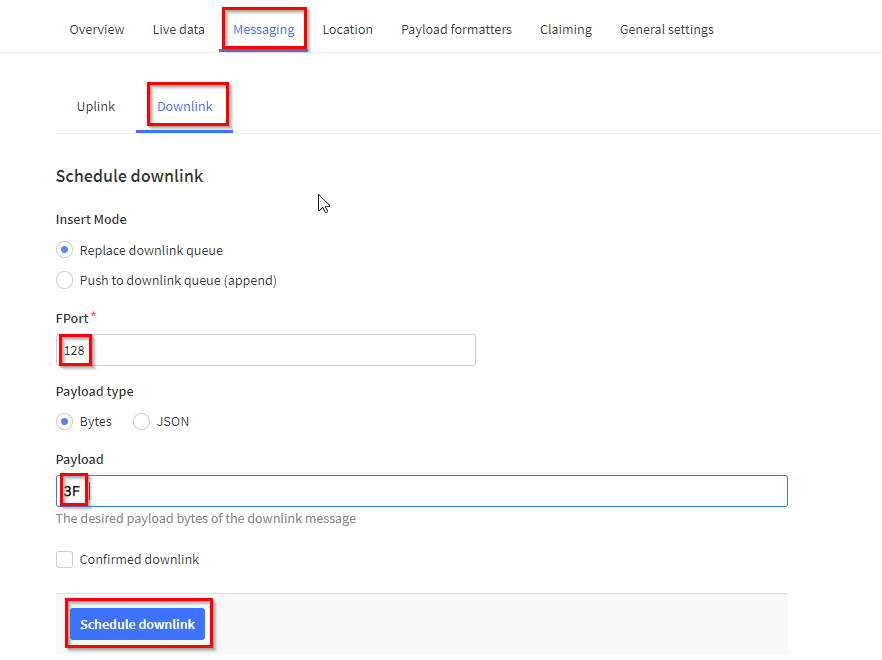 The downlink and response can be viewed in "live data":

The result of the converted HEX to ASCII is: 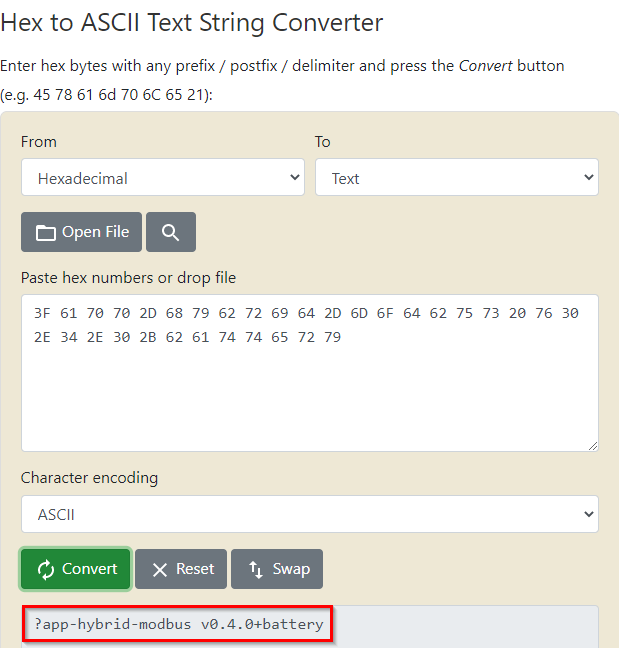 The downlink via a script via TTN would then look like this:

(You should use your own data for the API KEY, your-ttn-applicationID and your your_TTN_end_deviceID)
See detail TTN Documentation:

The downlink via a script via Chirpstack would then look like this:

(You should use your own data for the API KEY, your Chirpstack_IP_Adress and your your_ChirpStack_DevEUI)
See detail Chirpstack Documentation: